What’s in a title? Anti – (opposed to), Submarine (those metal canisters that schlep about under the oceans of the world carrying deadly missiles) – Warfare (killing each other for some politician’s grand design, in this case a whole tube full of sailors at a time) – Technician (conversant with the technical details). So, I learned how to be conversant in the technology of finding and killing tubes full of sailors beneath the sea. Thank God that we were only engaged in exercises, but I can tell you now that we were damn good at our mission. The crew, thirteen of us, flew in the Lockheed Neptune (pictured below). We would arise at 4AM, go through a pre-flight checklist of our aircraft and it’s systems, and then take off from whichever base that we were currently stationed. Our primary base was Jacksonville Naval Air Station, but we spent six months temporarily assigned to Signonella Naval Air Facility (Sicily), three months at Guantanamo, and a month at Boca Chica (Naval Air Station Key West). 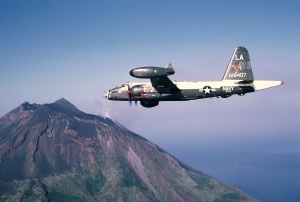 Our primary peacetime mission was shipping reconnaissance, and we would fly for as much as twelve hours over the surrounding waters plotting course, mast sequence and port of registration for each ship we found.  The process was to identify all the shipping in the area on the radar, then align the aircraft with each ship’s heading and fly by at about a hundred feet from the surface, taking photos with a fancy Hassleblad large format Camera. We flew so low that one could occasionally see the wake made by our propellers in the water below. A few months before I joined VP-5, a crew-member on one of our recon flights took photos of a Russian freighter. On the deck of that freighter were missiles headed for Cuba. If not for that flight and those photos we might not be so lucky as to still here to tell the story of the Cuban Missile Crisis.

Lockheed SP2E Neptune – the LA on the tail designated our squadron, VP-5, This was LA-4 which was manned and maintained by Crew 4. There are two 3350 cui Pratt & Whitney rotary engines, and outboard two Westinghouse Jets for landing and takeoff assistance. We called those jets “Westinghouse de-fuelers” because they burned fuel at a very high rate. Note the plastic nose cone. There was a seat there from which aerial reconnaissance photos were taken like the ones of the Russian Missiles. Also of note, there was an air supply hose which caught the outside air as it streamed by the nose – refreshing, particularly if one had had a snoot full the night before as was too frequently the case.

Over the course of my four years of active duty I was stationed first at Great Lakes Naval Station for recruit training, then at Millington Naval Air Station (Memphis TN) where I attended Aviation Electronics School. I was at Millington when John Kennedy took the bullet. We were in a large hangar like building studying dipping sonar, which was hanging from the ceiling on heavy cables, when the assassination was announced over the loudspeakers. After graduating from Electronics School I got orders to report to VP-30 at Jacksonville Naval Air Station. Thirty was a training squadron for Patrol Squadron flight crew members. As graduation from flight school approached we got orders to various squadrons up and down the East Coast. My orders were to VP-56 which was stationed in Norfolk VA. I didn’t want to go to Norfolk where it was said that girls did not drink, nor smoke, norfolk. So, I traded orders with a friend who had orders to VP-5 in Jacksonville, a few hundred feet away. 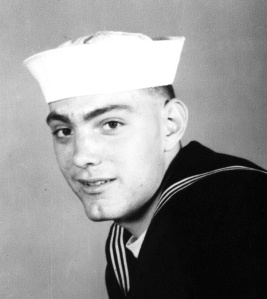 And that is how I began my four year journey being “conversant in the technology of finding and killing tubes full of sailors beneath the sea”. To be sure there were some notable adventures during this period of my life, but I spent my entire four years bitching about being a sailor in the US Navy. Looking back on it, my enlistment in the Navy was one of the very best things that happened during my lifetime. It gave me time to develop an appreciation for those things in the world of civilians of which I had not a clue when I entered the service, not the least of which was Higher Education.

When I graduated from high school my parents, God Bless and Rest them both, insisted that I needed to go to college. All I wanted to do was play music and drink, neither of which I gave up when I entered the University of Georgia in Athens, aka UGA, aka the Athens Country Club, and at which football games at Sanford Stadium were described as the world’s largest outdoor cocktail party. When I returned home at the end of that quarter in college I was on Academic Probation. Dad was not impressed, so he told me that he would feed me breakfast and dinner, and allow me to sleep indoors, but that between the hours of 7AM and 6PM I would not be allowed inside the house. I could sit on the curb out front if I wanted, but I could not come inside. I thought that to be rather draconian.

To make matters worse, the band that Bobby Vinson and I had formed two years earlier, the Jokers, fired me after a Christmas gig at Lake Allatoona. 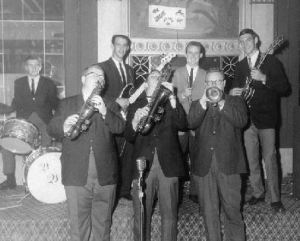 The singer, Charlie Adams, and I had been at war on every job over the sound system, which I provided, and he sang through. By this time I had become a jazz junkie, and Charlie didn’t like some of the advanced chords I was playing behind the rock tunes. And then there was “my drinking”. My loss of the job with the Jokers was perhaps the first indication of the real problem that would plague me for another twenty years, alcoholism, until I found the fraternity in which God reserved a space just for me, Alpha Alpha, or Alcoholics Anonymous. At this writing, that was thirty three years ago.

Back to the narrative at hand wherein I’m on Academic Probation with nowhere to go, and no band in which to play. I thought, “I’ll show them”, and I joined the Navy.  By the time I had been in the Navy for half a day I just knew that I had made a grave serious error. I arrived at Great Lakes Naval Training Center in February dressed in a London Fog jacket and wearing Khakis. Aside from the fact that it didn’t get above zero there for the first two weeks, they had the annoying habit of running a glass coke bottle (you remember them I’m sure) around the inside of a corrugated zinc trash barrel at four AM (commonly known as shit-can reveille). How dare they wake me from dreams in such a rude fashion. Then they would march us around between the barracks and the chow hall in close formation telling us to get “asshole to bellybutton”. They didn’t have to convince us, as it was freezing-assed-cold. We washed our wool uniforms, no dry cleaning in boot camp, and hung them to dry in heated drying rooms inside. If one got a late start, and there wasn’t room inside the drying room to hang ones clothes, you were instructed to hang them outside where they froze solid as a rock. Yes, boot camp was a blast.

Earlier I stated that the Navy was one of the very best things that happened to me in my life, and it was, but I’ll have to give the top award to Alcoholics Anonymous. There will be more about that as this blog continues. A new friend commented on my story “Who is Steve Negri?” and asked about my slogan for the blog “Adventures Before and After”. She asked, “what happened?” The answer to that question is that I was introduced to Alcoholics Anonymous. That introduction changed my life completely, as it has many millions of others. My life today bears small resemblance to how I was living before that.